“Long ago, in colonial times, the women of a town were distressed, for many special Spaniard visitors were coming for lunch!”, I remember my father telling me, as I sat listening wide-eyed to the legend of how the Fiambre started.

“They were coming quite unexpectedly and in large numbers and the women had no time to prepare a large feast as usual”, he continued.

“They decided to each run to their pantries with their maids and cooks and bring out all of the special things that were put away there. They put it all together with great ingenuity and set the tables with fresh white tablecloths. The great lords came that day and sat at the table and were very impressed with the very special taste of the dish set before them.” 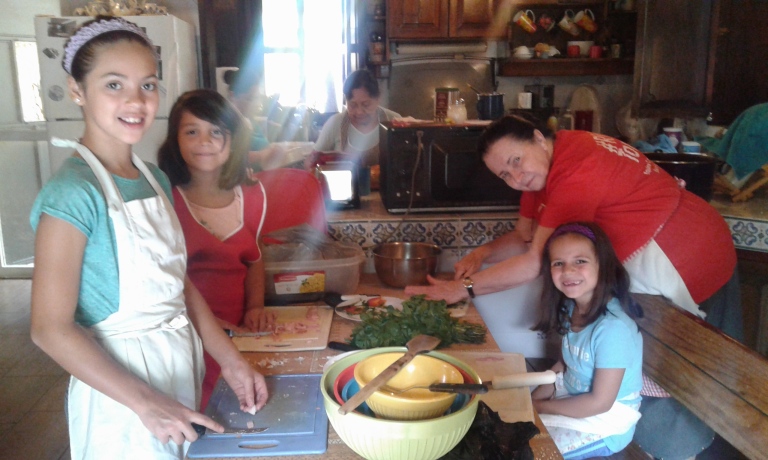 Grandma and kids dicing and chopping

There are many different theories of how this very special Guatemalan dish began. One story tells of a woman who’s husband died unexpectedly on November first and was buried quickly. After the funeral,everyone came to her house and of course, they expected  food and refreshments. She and her maids quickly put together the dish which was a great success. The guests were so delighted with the dish they requested the name and recipe from the widow, thus making this delicious dish every November 1st.

The most broadly accepted version dates back to the time when the main city was situated where the city of Antigua, Guatemala is now. After a devastating earthquake in 1773, the city of Santiago de los Caballeros was to be evacuated and moved to the new Valley of the Hermitage (Valle de la Ermita). Several families decided to stay against the orders of the General Capitan of the Kingdom, Don Martín de Mayorga, who made his authority known severely punishing the residents by cutting their water and food supplies.

The homemakers suffered the consequences of the cruel Mayorga but defended their tables with much ingenuity, boldness and invention.

Taking advantage of herbs known to be edible and at hand, they made delicious dishes with exquisite and unique sauces deserving these ladies the name of Panzas Verdes or Green Bellies.

The Fiambre which is believed to be a product of these ingenious ladies is considered to be a great example of the pluricultural and multiethnic composition of the Guatemalan population because it includes the native herbs, the cold cuts typical of spanish dishes and the olives, capers and spices of Arabic influence. 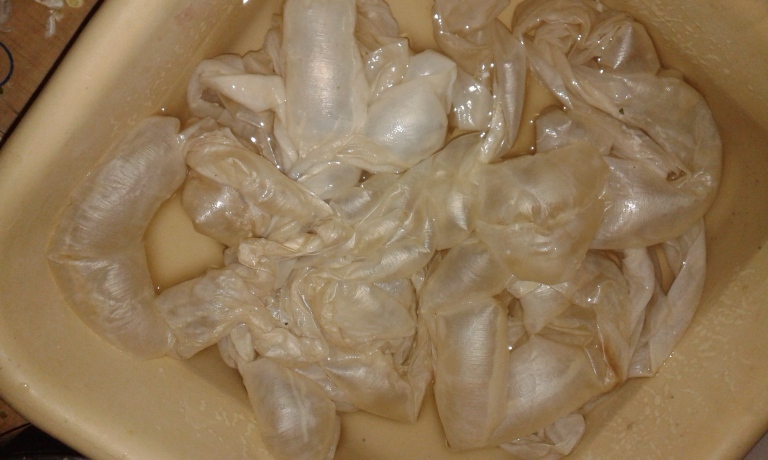 Cow tripe washed and moistened, ready for use.

Nonetheless, the earliest mention of this dish has been found in recipe books dating to the late XVI century and in diaries kept by friar Tomas Gage who refers to them in his journal describing his travels in 1625 and 1638.

On November first, the Day of the Dead is Celebrated (or All Saints Day) with many traditions that refer to the communication between the dead and the living. Some of these traditions include visiting the graves of the ancestors with specific food (vegetable dishes or sweetened fruit dishes) and drink (water or alcohol). Some people still hold the tradition of eating at the grave site but most have abandoned it and gather with family at home to share this dish.

Our family celebrates this day every year by making the fiambre with my Paternal grandmother’s secret recipe which includes making four types of sausages from scratch. It is a delightful process and a tradition that will continue to the next generations of our family!!

At home in Guatemala!! View all posts by PriscilaCebeira

This is a text widget. You can use text widgets to display text, links, images, HTML, or a combination of these. Edit all of these widgets in the Customizer Widget section.